Although there is no cure for rosacea, laser treatments can effectively control and improve symptoms

Treatment for rosacea varies with each person’s unique history and symptoms. The physician may initially prescribe a topical antibiotic cream to be used in conjunction with oral antibiotics.

Rosacea may also be treated with laser therapy, sometimes in combination with medication to reduce inflammation and yield better results. While laser therapy remains the preferred method for treating all forms of rosacea, it is most effective at either extreme of the condition, in other words, in the earliest stages or once it has progressed to the point where, for example, the nose has become enlarged and deformed (rhinophyma).

In its early stages, rosacea responds very well to vascular lasers, particularly to the pulsed dye laser which targets the generalized redness as well as the bluish blood vessels. When the inflammation caused by rosacea is treated beforehand (through medication), nearly 80% of the redness (dilated blood vessels) can usually be eliminated in two to three laser treatment sessions.

At the more extreme stage of the skin condition, the CO2 laser can effectively correct rhinophyma by reshaping the nose, restoring the face’s balance and proportions with spectacular results! Healing typically takes about a month, and a second treatment is sometimes necessary for optimal results. Dr. Barolet is renowned for this treatment procedure.

While there is no cure for rosacea, the visible signs and symptoms of the condition can be significantly reduced by halting its progression. Left untreated, rosacea can cause permanent damage, sometimes resulting in disfigurement and the eventual need for corrective surgery. 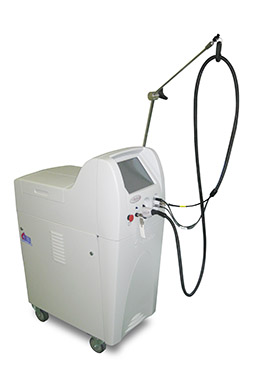